Ordinary car enthusiasts, put their name on the driving license.

Veteran car enthusiasts, put their name on the car body.

Great car enthusiast, put their name on the car logo.

Do you know that Aston Martin, abbreviated as AM, why the code name of the golden car series starts with DB?

Maybe it’s because they are all British brands,The founding story of Aston Martin is similar to that of Rolls Royce. The founders are also two: Robert Bamford and Lionel Martin; the two are also Befriended by co-selling cars:

Initially acted for the sale of the Singer brand;It was also because of selling cars and loving cars that they decided to build their own cars. 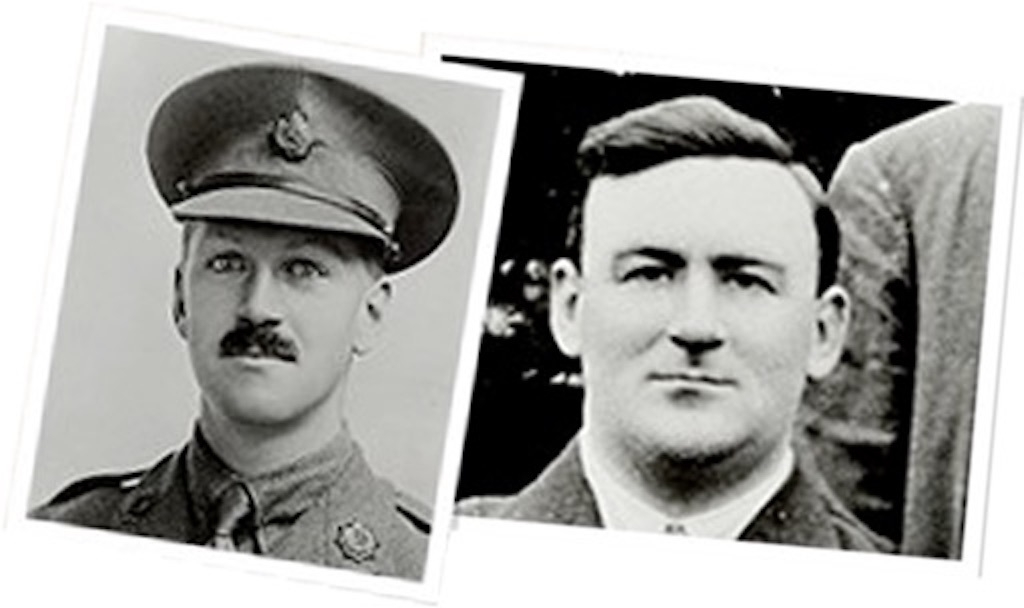 However, the road for children from poor families is even more bumpy.

In 1913, the two men’s company was founded, which was not yet called Aston Martin at that time.Instead, one letter is taken from each person’s name,It is called Bamford & Martin Ltd.

In 1914, as a racer, Martin won the Aston Mountain climbing competition. To commemorate this victory, and also because Aston is easier to find in the telephone directory, the brand was renamed Aston Martin. 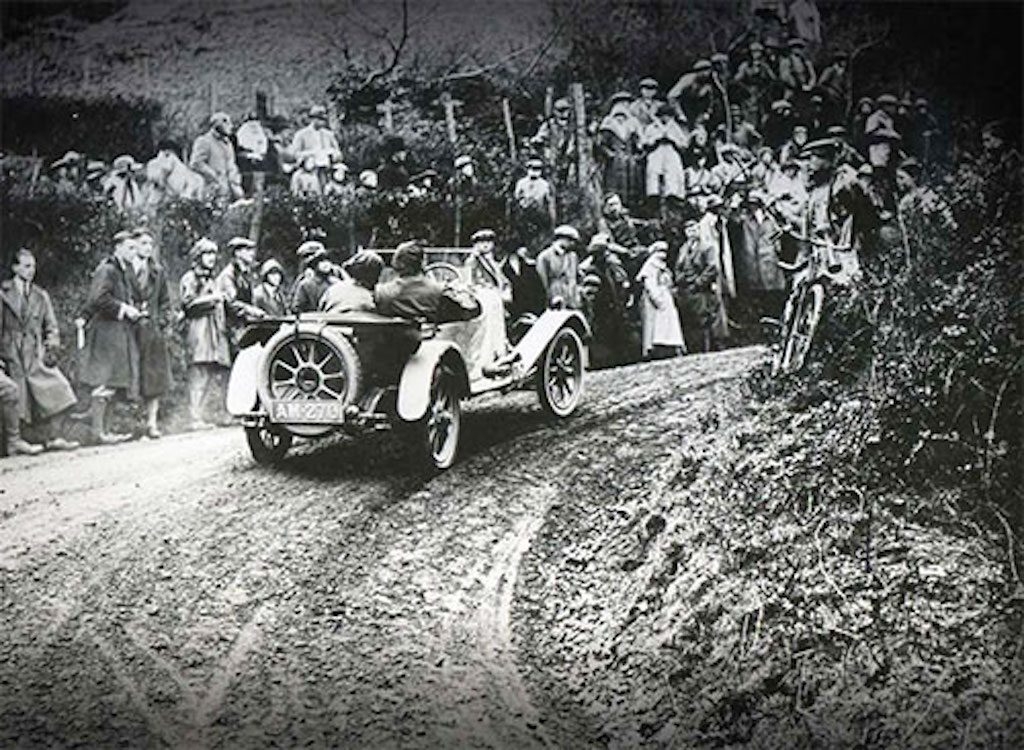 In 1915, the first car built by two people was registered. Although the car was designed by two people, the core technology all relied on the outside.

The chassis of the vehicle is a 7-year-old Italian Isotta-Fraschini with a 1.4-liter four-cylinder engine produced by Coventry-Simplex. 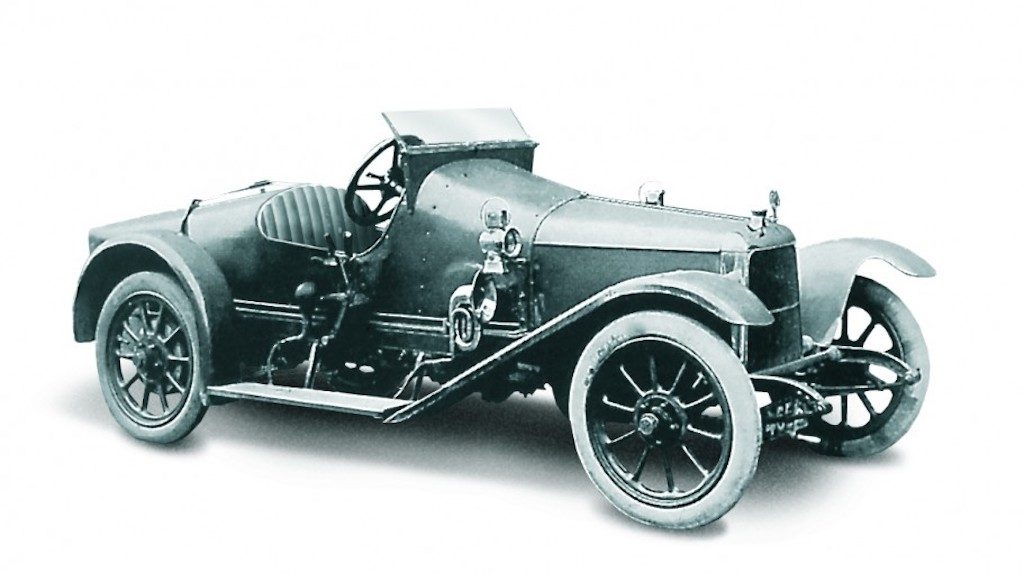 Because Aston Martin’s brand was founded a little later, its first model appeared to be more similar to contemporary vehicles.This car has a nickname, Coal Scuttle.

Just as World War I broke out, both founders were recruited into the army.

Martin entered the Navy and Bamford entered the Army,The company thus discontinued. There is a small tidbit. During World War I, the first two models manufactured by Aston Martin were all destroyed. We can only rely on photos to pay tribute to them.

In 1920, the war ended and the two founders survived,So the company was reorganized again, but soon, because of income distress, Bamford left the company. 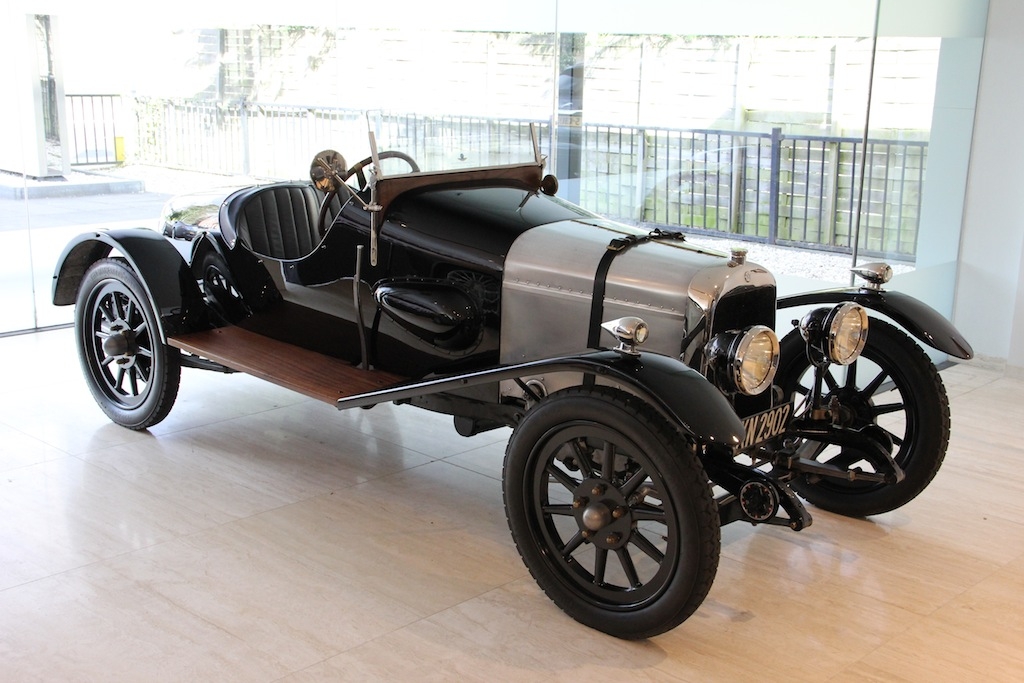 In 1921, the first car logo in Aston Martin’s history was released, with the letters A and M each complementing each other.It is also the only one that is inconsistent with the current Aston Martin car standard car standard style 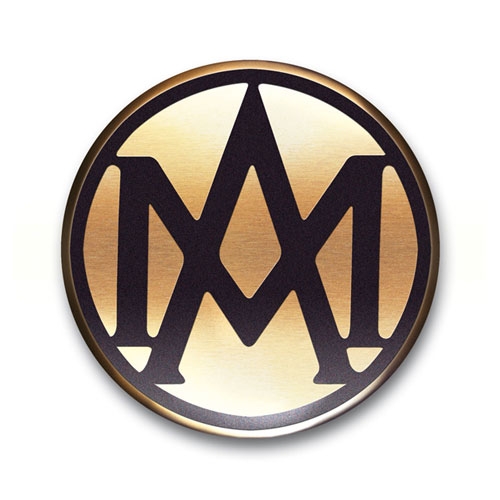 In 1922, Aston Martin produced a racing car with a 16-cylinder dual cam engine. This car set a double world record for car speed and endurance in the French Grand Prix at the time,which let the brand became known.

However, due to the narrow audience of professional racing cars, Aston Martin did not sell well in the market. Only 55 cars were sold intermittently in two years.

In 1924, Aston Martin went bankrupt... A lady named Dolores was willing to continue investing and saved it once.

In 1925, Aston Martin, who had been living for another year, went bankrupt again, and this time he lost even more money.

In 1926, not only the factory was completely closed, but even the founder Martin also left. This time, "Aston" and "Martin" no longer have anything to do with this brand.

In 1927, Bertelli and Renwick both acquired Aston Martin, when two people have a engine plant was about to change hands, the results of Aston Martin heard such a good car brand went out of business, and quickly in the bag.

At this time, the second official logo appeared, which for the first time adopted the shape of wings, which became the model of the car logos,which with clearly identifiable feathers.

Bertelli played an important role in Aston Martin's history, serving as head of design from 1927 to 1937, and instilling his soul into Aston Martin's models.

In this process, the third-generation car logo was replaced in 1930, which is characterized by more perseverance and a more industrially designed feeling.

But none of these car logos brought any good luck.In 1932, the company encountered a crisis and almost went bankrupt again. After receiving the capital injection, the company changed hands again. In the same year, the fourth-generation car logo was released.This generation of car logo was designed in combination with the Egyptian Golden Beetle's styling concept.This time the car logo also lays down all the styles of the current car logo.

In 1939, Aston Martin tried to design a concept car called Atom.Before the outbreak of World War II, automatic gearbox and independent suspension were used, which is extremely advanced. In order to be able to match this car, a silver car logo was specially designed.

This fifth car logo has also become the most rare and precious car logo in Aston Martin’s history. 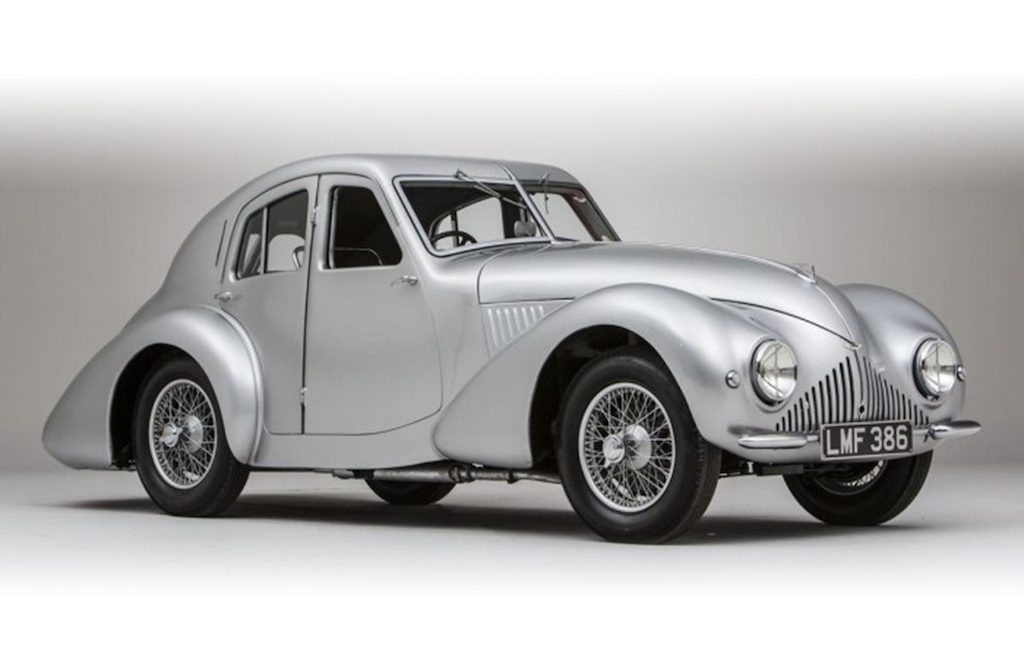 Although car fans always like to say that many sports car brands are tractor factories, Aston Martin was really acquired by the tractor factory this time. 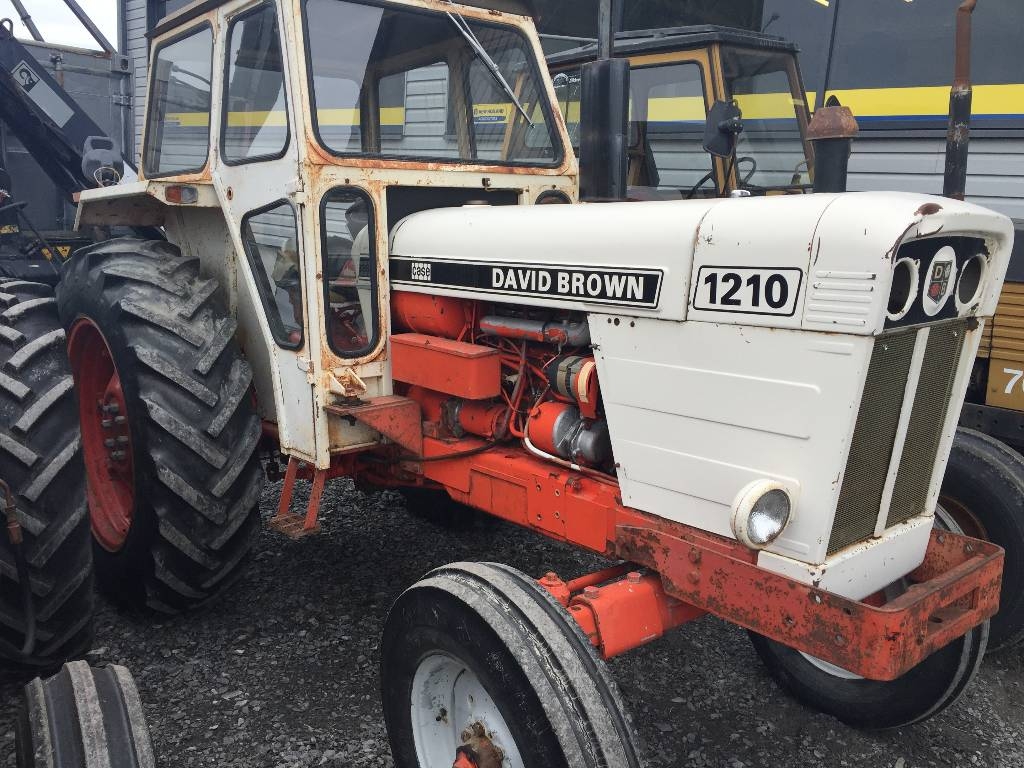 Due to the change of ownership, in 1950, David Brown added his English name to the Aston Martin's car logo, and the newly developed car series also began the era headed by DB.

And what made Aston Martin thriving was the DB5 in 1963.In 1964, a 007 Goldfinger DB5 with license plate BMT216A became bond's official car.A series of technological modifications made this 007 companion a national lover. 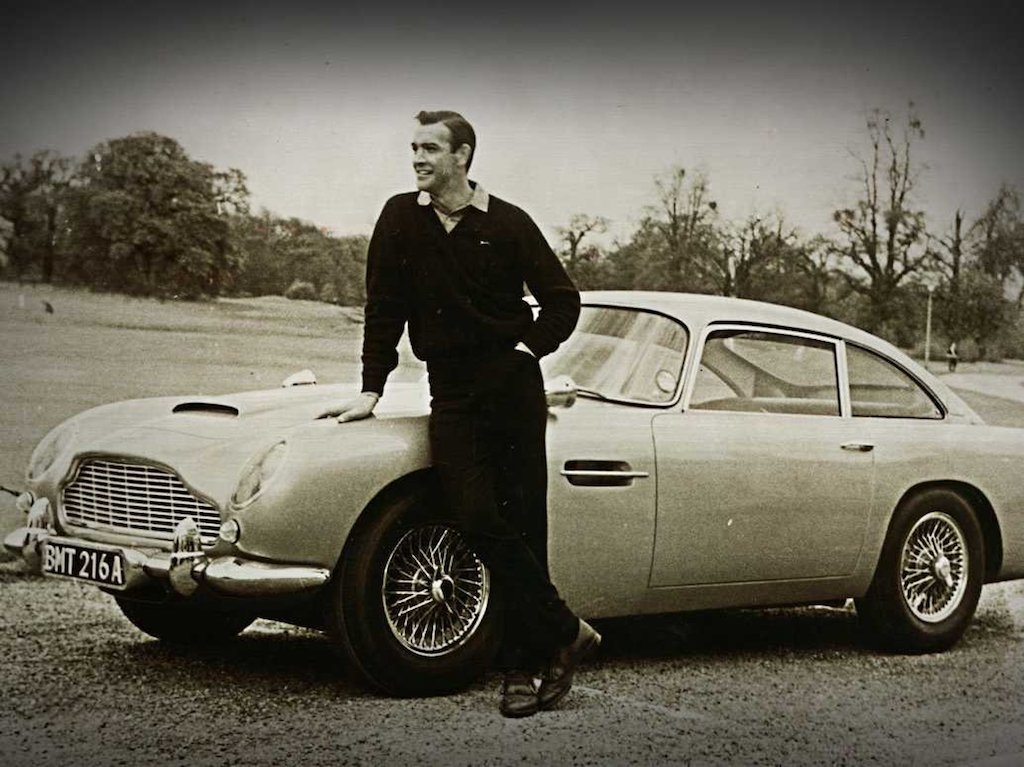 The DB era lasted until 1971. That year, Aston Martin introduced the DBS V8 luxury model. In order to highlight the difference,they featured a distinctive colour scheme for its logo,Unexpectedly, the life of this car logo is fleeting like a meteor. 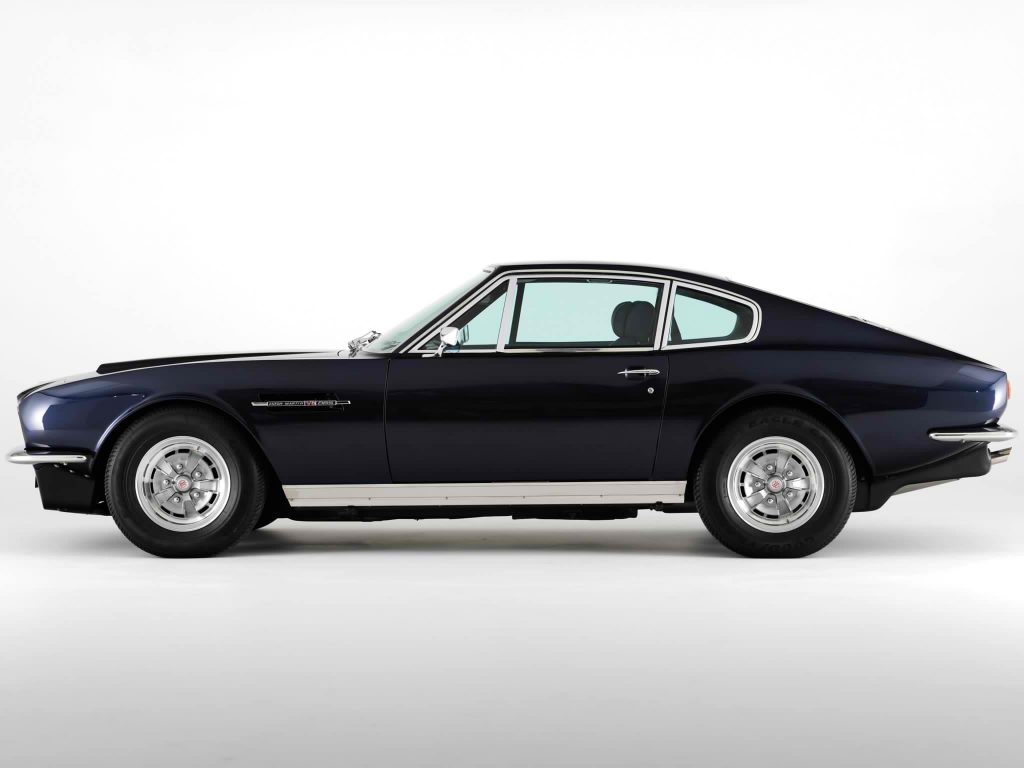 In 1972, the company was sold again... The new leader of the company was named William Wilson. He opened a company in Birmingham, England. After taking over, he launched the well-known V8 Vantage series.And since it has nothing to do with the DB, the DB in the car logo is immediately removed.

The company changed hands five times between 1974 and 1987. Of course, this did not affect the brand's status,In 1982, Aston Martin became one of the brand cars used by the British royal family. 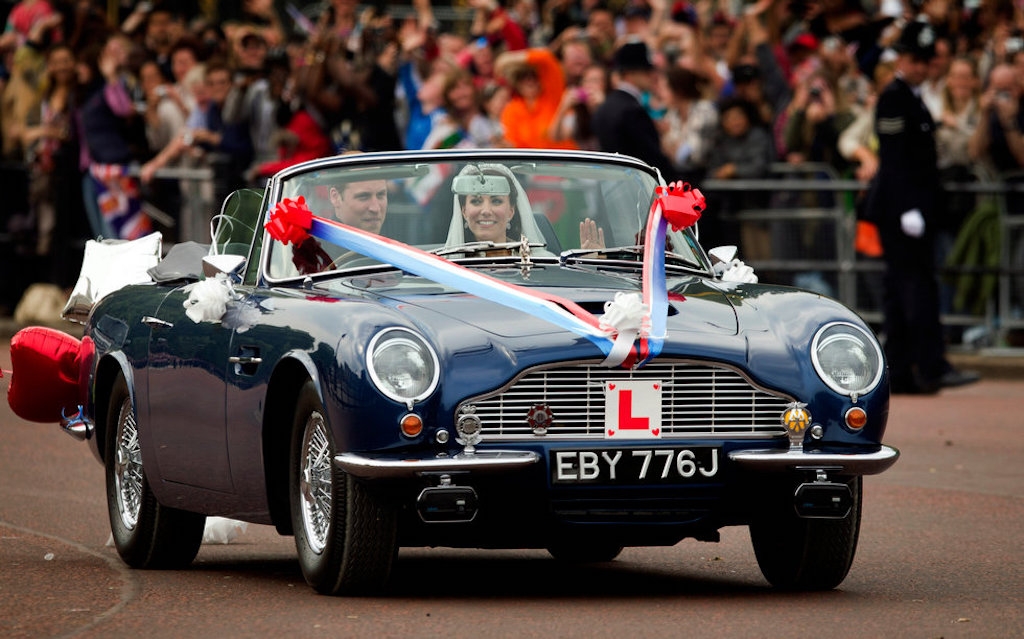 You may wonder why such a well-known company changed hands so many times. In fact, it is partly due to sales and profit problems. You may not imagine that aston Martin's sales only exceeded 10,000 units until 1984.

And this may be just one month's sales of a single model of many popular brands.

Of course, in order to commemorate this historical event, Aston Martin completed the ninth car logo change that year, and the car logo became simpler and clearer.

In 1987, The displaced Aston Martin was acquired by Ford. Ford's capital and technology enabled the company to turn from small to mature production. In 1995, Aston Martin produced only 700 cars, but in 2002, the number became 6000. 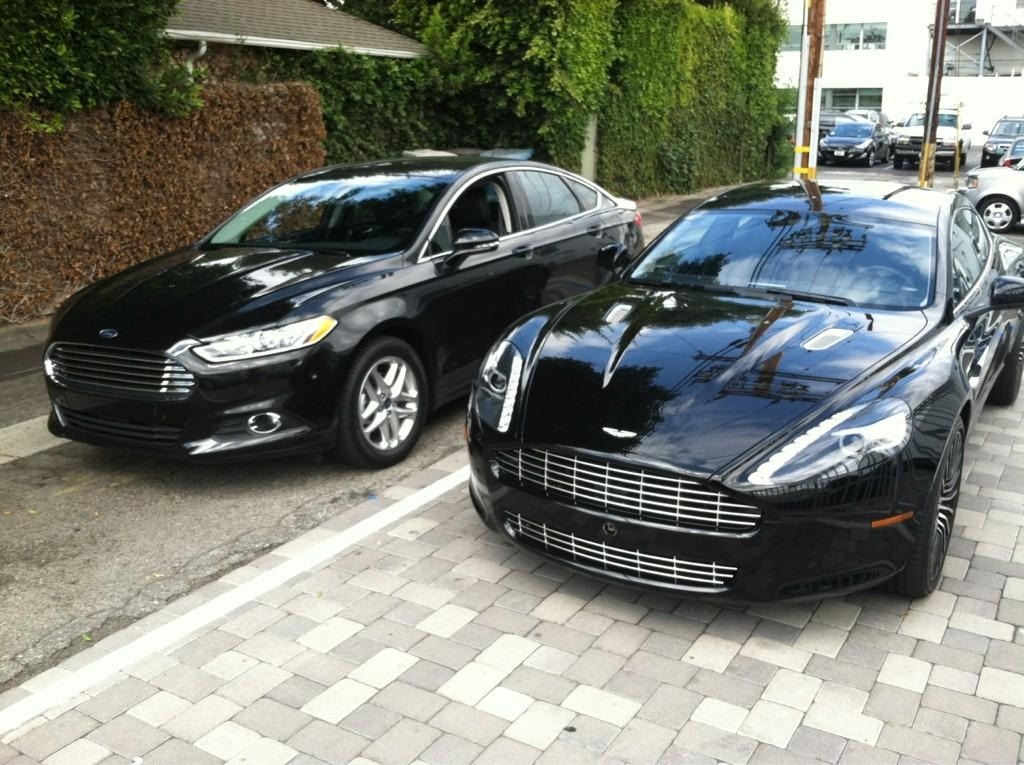 In 2003, the 90th anniversary of Aston Martin, in order to commemorate this historic event, the official release of the tenth car logo, which is also the one we can see now, is more aristocratic in general.

In 2007, the company was again sold by Ford to David Richard, an Englishman, and the wanderer returned to his native England.

In 2007, the company was again sold by Ford to David Richard, an Englishman, and the wanderer returned to his native England. 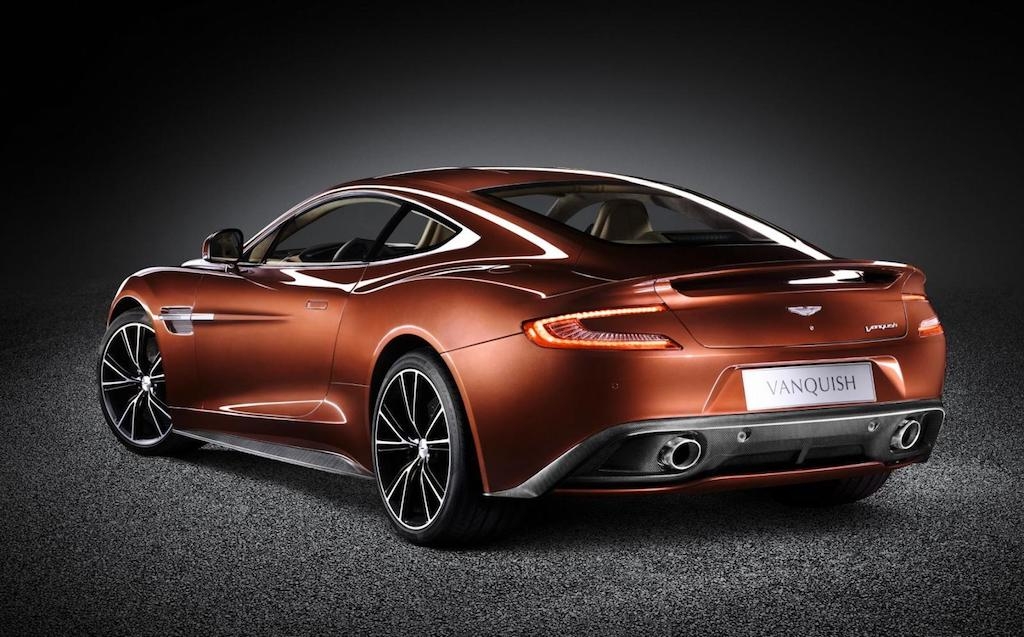 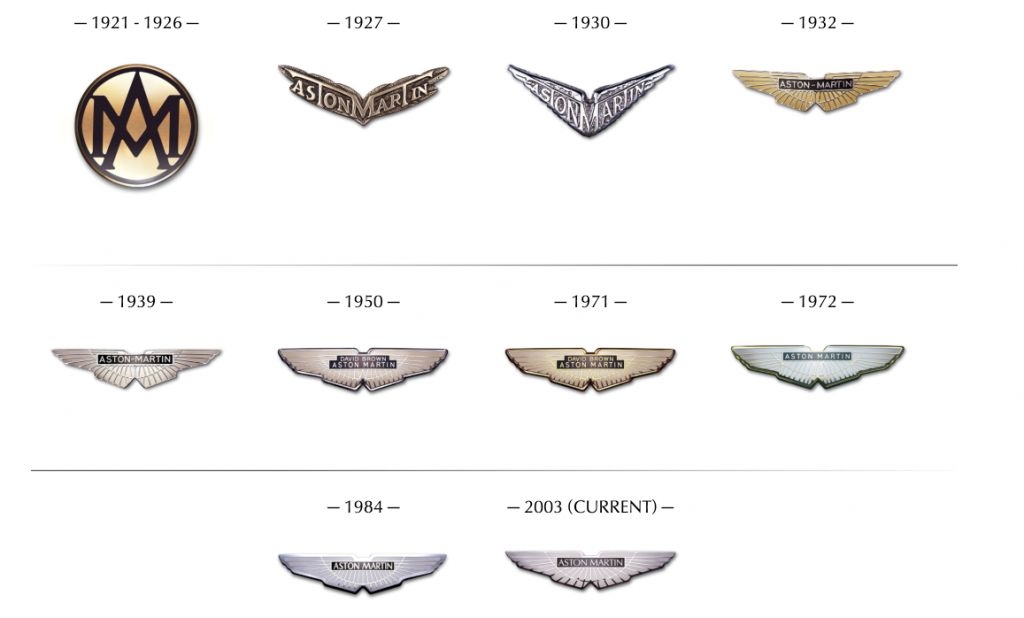 The author has something to say:

As mentioned earlier, the birth of the DB model is a turning point for Aston Martin, which is almost the most prestigious model of Aston Martin. In 1947, David Brown acquired Aston Martin, which basically ended its years of bankruptcy. DB is a model named after its own abbreviation.The first DB model that is generally known to everyone is the DB2 that was born in 1950. The DB1 that has been circulated in the market is not actually called the DB1. It is a racing car equipped with a 2L four-cylinder engine and is named 2-Litre Sport.This car participated in Le Mans in 1949 and won the championship.

After all, the audience of the event is niche. It is the 007 series of movies that really spread the popularity of DB to the public."Gold Finger" released in 1964, opened Aston Martin and 007 many cooperation.The most famous of these is the DB5. In 007's Eyes of Gold, Piers Bunonan raced his silver DB5 through the Alps against a Ferrari 355, and of course the DB5 won. This has excited Aston Martin fans, but also annoyed Ferrari fans, who think it's too fake... But Aston Martin is a very low-key sports car.

Every ultra-luxury brand has two common characteristics: it was born in the last century,To possess years is to possess wealth;they are inseparable from car races,Motor racing is like a raging fire,Only a brand that has experienced its refinement can be called a top luxury brand.Aston Martin, which was born in 1913, has been accompanied by endless bankruptcies, acquisitions and reorganizations, but competition genes have been flowing in its blood.

Aston Martin invested in Le Mans in 1928 and won the 1500cc category.In the next 24h Le Mans endurance race, Aston Martin almost never missed it. In 2017, at the 85th Le Mans, VantageGTE equipped with 4.0T V8 won the championship again.Aston Martin officially sponsored the Red Bull Racing Team in 2018, and Red Bull was renamed Aston Martin-Red Bull Racing Team.Coincidentally, Ricardo won the championship in F1 Shanghai in April. It is said that Aston Martin will also become an engine supplier for F1. By the way, the current engine suppliers for F1 include Ferrari, Mercedes-Benz, Renault and Honda.

According to the point of view that there is no data to prove,F1 is far more popular among the people than Le Mans. The reason why Aston Martin joined F1 may be to change the label of being too low-key, not publicizing, middle-aged uncle.

As a high-end positioning brand, GRWA is unlikely to be absent from Aston Martin's related exhaust product development and supply.

The picture above shows the exhaust rear of the DB9, which is compatible with the OE rear.This exhaust pipe is carefully made of 304 grade stainless steel, and the product quality is reasonable.Overall weight reduction can be achieved to improve braking, handling and acceleration. The content of the system is prepared with X tubes, which helps to make the exhaust flow more free. 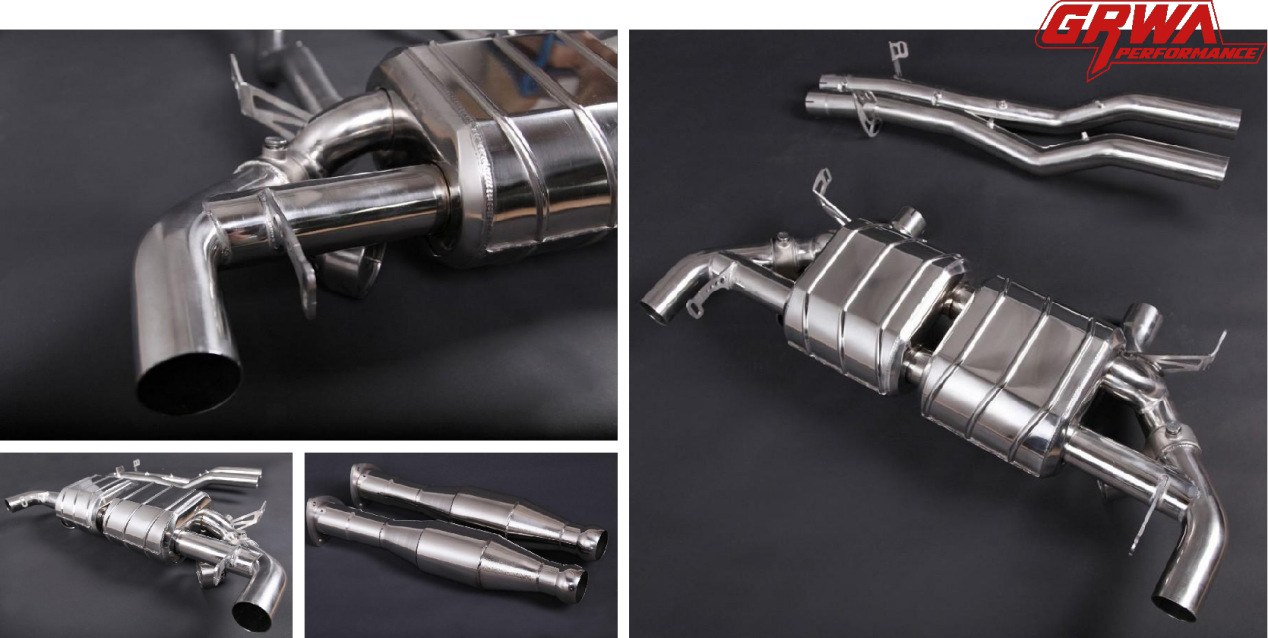 This is the Capristo sports exhaust system for Aston Martin DB9 and DBS V12. Made of polished stainless steel 1.4828 (T309). The system can be controlled by the on-board control system. 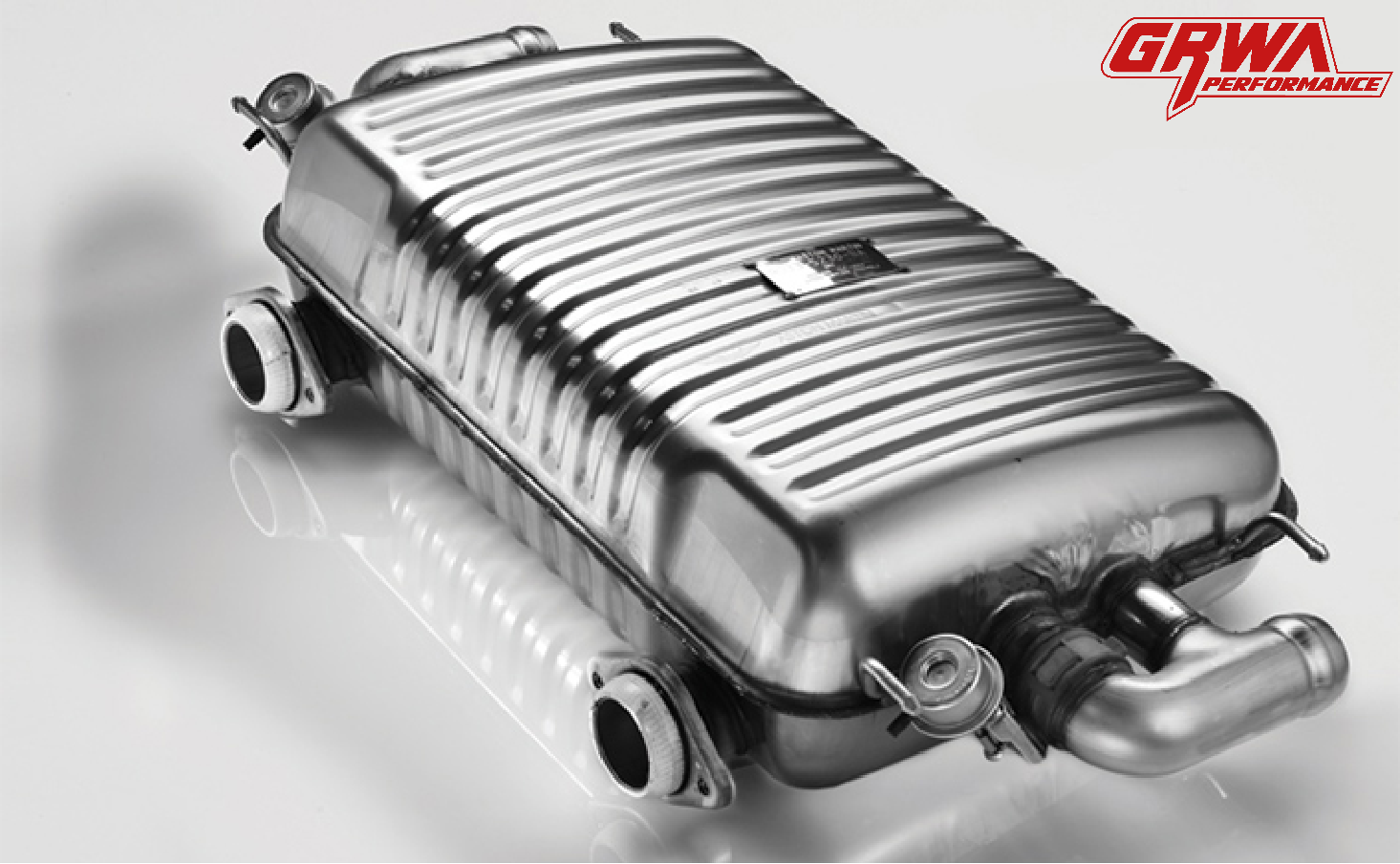 The V8 Vantage Sports Exhaust is equipped with a new stainless steel muffler, which is designed and developed to meet the same exciting standards of durability and integrity as the car's original fitted muffler, ensuring compatibility with your Aston Martin.

The muffler is a new light-weight design with a new profile to support airflow under the vehicle, different internal adjustments, and an exhaust valve that retains engine management control.

If you happen to be a fan of the Aston Martin brand and are driving this tasteful car, if you need a muffler, you may wish to contact us, and we will provide exclusive solutions according to your specific needs.