First look at the composition of the exhaust system: 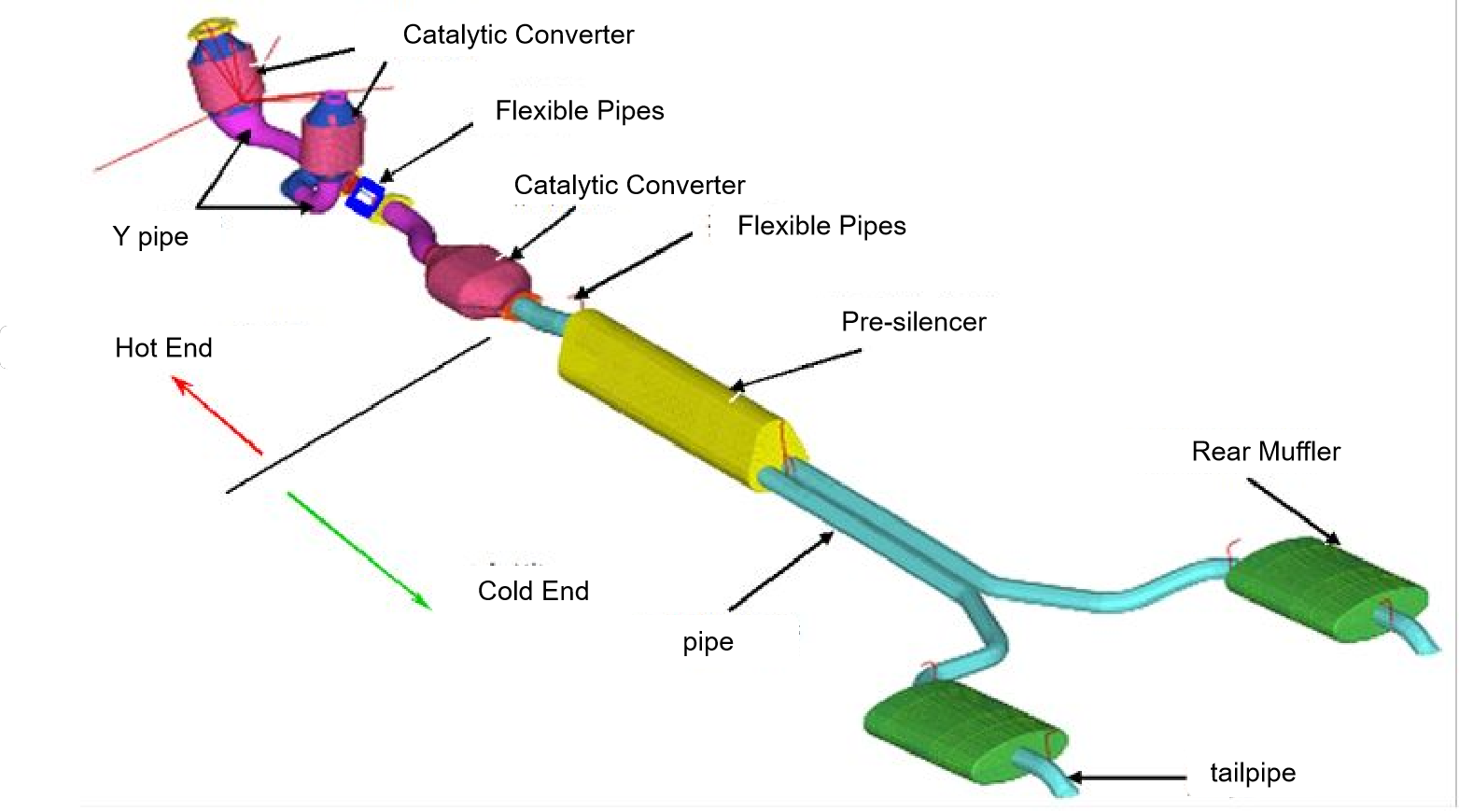 Generally speaking, the flexible connecting pipe is the dividing point between the hot end and the cold end, of course there are special cases. Close to the engine is the hot end, mainly exhaust manifolds and catalytic converters. The temperature can reach 800~900°. The cold end far away from the engine is mainly the muffler. Cold does not mean that the temperature is really low...

As you can see in the picture, the main arrangement behind the double outlet is the muffler. 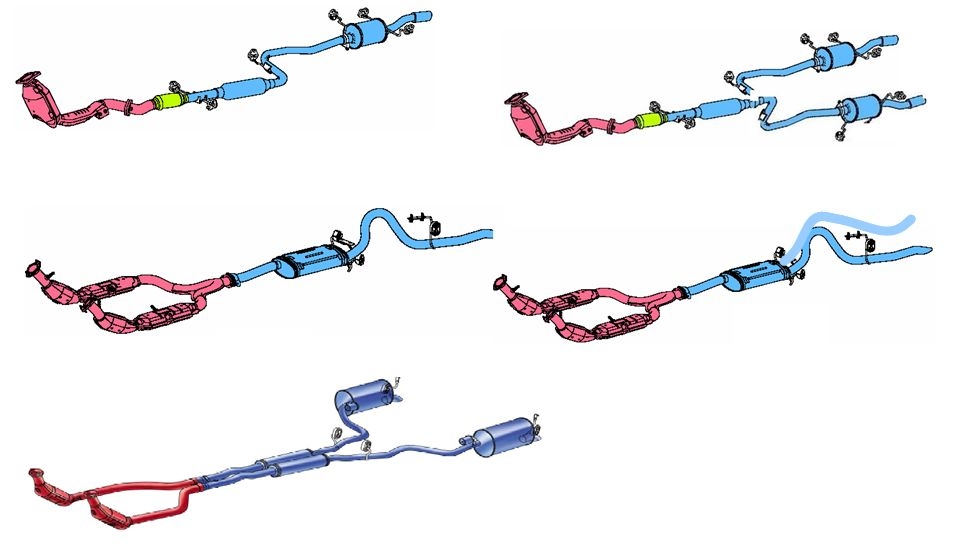 Both single outlet and dual outlet are used in four-cylinder engines and V-engines. The last independent dual exhaust system is used in V-engines.

There are many sources of exhaust noise.

For example, when air flows in a pipe, the sound caused by its own vibration caused by its own energy, when the flow rate is constant, the larger the pipe diameter, the more stable the airflow, and the lower the sound. If the exhaust pipe is designed from an acoustic point of view, this is the consideration. Part of the noise.

In addition, because the exhaust valve keeps opening and closing, it will cause periodic and unstable air flow. This part of the airflow will cause sudden changes in the cross-sectional area of the pipe, or the elbow will form an impact, causing noise.

in addition, the friction between the air and the pipe wall will also Will form noise.

There is also a kind of radiated noise. When the vibrating body is in contact with the fluid, it will push the fluid and produce sound. A microphone is an example of this. The exhaust system is excited by the vibration of the engine and the car body, which will cause the entire structure to vibrate, as well as the pulse fluctuation of the air flow, which will cause this kind of noise.

The main method to eliminate noise is the muffler. The latter types of noise cannot be avoided, and the design of the pipeline cannot be considered too much. There are also several types of mufflers, such as a resistive muffler that reflects energy back to the sound source to suppress sound, or a resistive muffler that uses sound-absorbing materials to convert sound energy into heat. The noise in the engine has a narrow band of pure tones, which is more suitable for resistive silencing, and the mixed sound is broadband, which is more suitable for resistive silencing.

At the very end of the exhaust, there is a tailpipe.Generally speaking, when a stone is thrown into the water, ripples are formed. When the ripples reach the river bank, because the earth serves as a boundary, the ripples can only reflect themselves back. A simple and imprecise understanding is that the momentum and kinetic energy of high school have different qualities. The effect of small balls colliding.

In the part of the tail pipe, the airflow has to flow out into the atmosphere, and the atmospheric environment is quite stable in the pipeline, so the pulsation of the airflow here is a bit similar to water waves.

There are two main types of noise generated in the tail pipe. 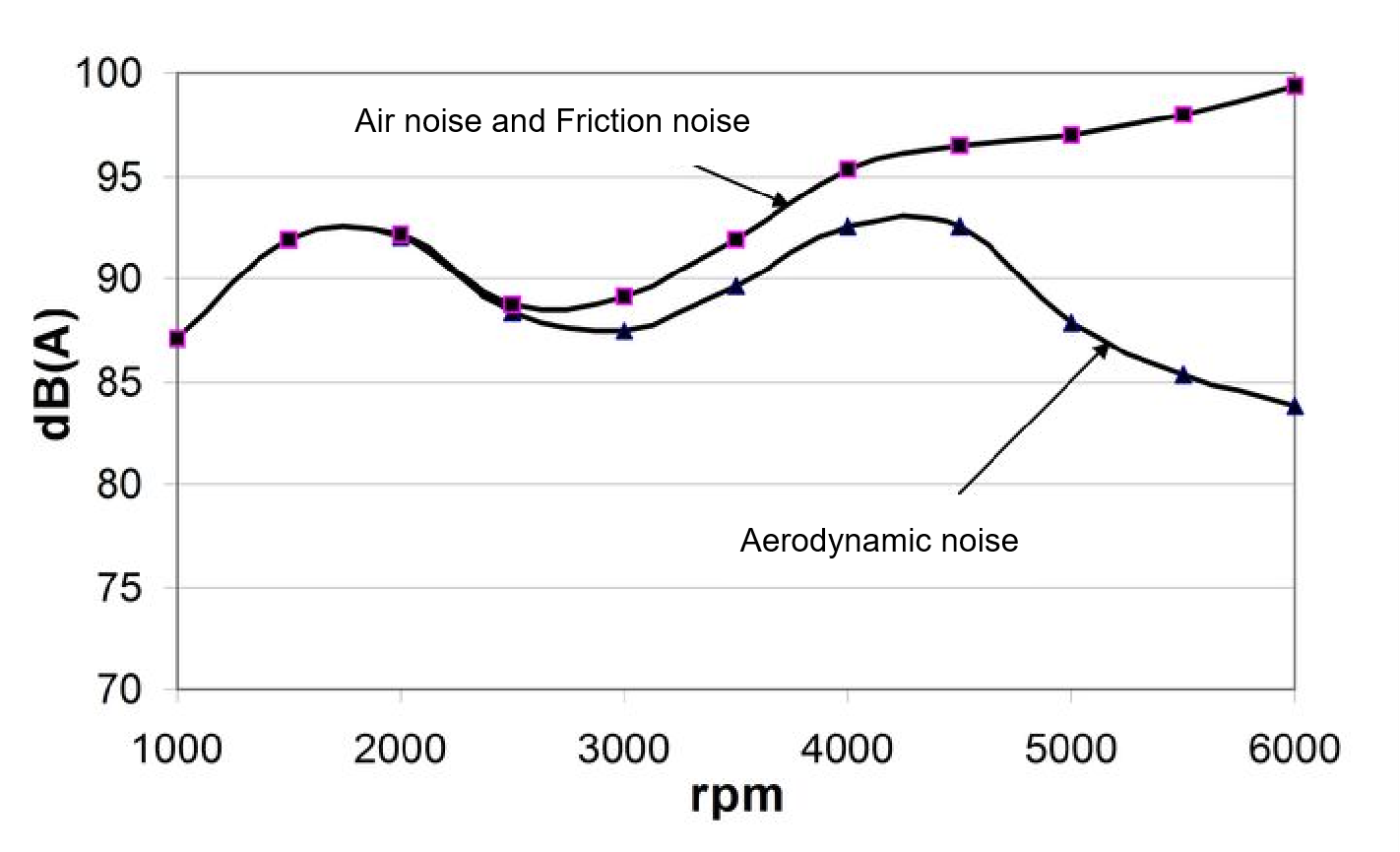 It can be seen in the figure that the total tailpipe noise is the dominant aerodynamic noise trend at low speeds, but has no influence at high speeds, and is dominated by friction noise.

OK, the basics have been said.

The difference between single outlet and double outlet is actually the rear muffler, there is one or two differences.